The evidence strongly suggests that the Koch brothers’ grandfather was a foreign intelligence asset. It also appears that the Koch Brothers father, Fred C. Koch, was one too.  This paper will discuss the evidence to support the claim that the two sons who control the Koch family’s massive wealth are completing the family goal of destruction of the US civil society.

I started on this investigation looking into reports of a connection between the Koch family and infamous members of the German Nazi Party.  So far, I have not found  evidence to support that specific claim. Fred Chace Koch’s excessive offshore activities starting in the 1920’s and continuing to the 1940’s still may turn out that his actions were related to Nazi Germany.

The first Koch Family member in America was Hozte Koch who changed his first name to Harry.

Harry Koch arrived in American on December 4, 1888 as a passenger on the S.S. Amsterdam, that had sailed from Rotterdam to New York.   There is evidence that he immigrated from the Netherlands by way of Bremen Germany where he was supposedly working as printer’s apprentice.   The big question is: How did a printer’s apprentice in 1888, the date of his arrival in America, buy two newspapers shortly after he arrived?  The logical conclusion would be that he had an external source of capital.

There are unverified reports that Harry Koch lived in New Orleans, Michigan and later in Chicago Ill.  In any event, sometime in the 1890’s he moved to Quanah Texas in Hardeman County and soon purchased the two local newspapers.

Harry soon married Margaret “Mattie” Mixson, a Texas native, and is alleged to have had two sons, Fred Chase Koch and John Anton Koch.  The 1900 U.S. Census taken on June 22, 1900 for Hardeman county Texas list Harry Koch as born in the Netherlands and immigrated in 1888.  Twelve years a resident.   It also shows he was not a naturalized U.S. citizen and I have found no evidence he ever was naturalized.   Harry’s birthday is reported as October 1867.  His age in June 1900 was reported to be 32 and he had been married two years.  Occupation was “editor.”

Harry got busy in the newspaper business and was even chosen as the President of the Texas Press Association in 1918.

There is yet unverified reports that the rail road that was being built through Quanah was financed by Dutch capital.  Having a person who could ask questions as a matter of journalistic endeavor would have been good cover for an intelligence officer put in place to monitor a Royal Dutch investment and is a common practice.  Moreover, I am exploring the facts surrounding Royal Dutch Oil (nka Shell Oil) that was engaged in activities related to the oil patch in Texas in the early 1900’s. More later.

The John Anton Koch draft card dated 19 days before Fred C. Koch was required to register, contains some surprising data.  First, it evidences that John Anton was a laborer working in Laramie Wyoming.  I have found nothing to support this fact beyond the John Anton Koch Draft Card. This would appear to conflict with the evidence that in 1918 both Koch brothers were students at Rice Institute (later named Rice University). Here are two pages from the 1918 Rice Campanile yearbook.  Fred and John at Rice Pages from Campanile 1918    This evidences that despite the approximate two year age difference, the Koch Brothers were in the same freshman class.

The 1920 Federal Census evidences John and Fred both living with their parents.  John is shown as a reporter, and Fred a salesman in a drug store. Consistent with the theory that the Koch’s were engaged in espionage is the fact that during the period that John Anton Koch was in Wyoming, the region was in an oil boom that also included the building of a highway system that could explain his job in a cement related business.

Though with today’s DNA technology it would be fairly simple to verify Fred C. Koch’s relationship to Harry and Margaret Koch, a simple comparison of the contemporaneous photos of Harry, John and Fred show the apparent similarity between John Anton and Harry.  Fred did not share the similarity in my opinion. 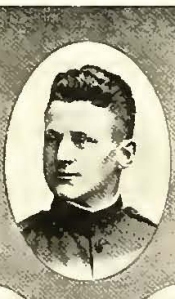 It appears that John Anton did not advance beyond 1918 at Rice and the evidence shows he worked in his Father’s newspaper in Quanah Texas.

Fred entered MIT as a sophomore, was captain of the boxing team and was in the graduating class of 1922.   Here is a shot of Fred as a boxer in MIT’s 1921 Technique yearbook. 1922 MIT Yearbook with the1921 MIT Boxing Team with Fred. Again, the lack of similarity to his father is apparent to me.

One of the strangest artifacts of Fred Koch’s life history is his 1924 U.S. Passport application.  Fred Passport Application Complete with index. This application made in New York discloses that Fred had been a seaman in the British Isles in the summer of 1919.   Rather than include a copy of a birth certificate to prove his birth, the application contains an affidavit from someone claiming to know the relevant facts obtained when he taught the Koch brothers in high school in Texas.  Based on this somewhat flimsy support, Fed obtained a passport and then set off on repeated transoceanic voyages and flights. The dissimilarity between Fred’s 1922 MIT yearbook photo and the one attached to his 1924 passport application is also noteworthy.

When Fred’s life is addressed it is generally claimed that he developed technology and then applied that technology to advance the oil industry of the Soviet Union.  One document that is available online shows that in February 1945, Fred traveled from Halifax Nova Scotia and was listed on the ship’s papers as a U.S. Govt. Official, care of the U.S. Embassy London.  Fred Passenger List Govt Official. This is the pattern of Fred’s travel as evidenced by the records obtained on line. 1924, 1925, 1930, 1931, 1933, 1937 and 1945.   There may be other trips that I have not yet uncovered.

The Koch family story says that, despite having played a key role in the development of the Soviet Union’s oil industry, Fred became disillusioned about the communist system he had helped build and returned to the U.S. as a staunch anti-communist.  He then set about to establish one of the most radical right wing fringe groups, the John Birch Society, named for the person claimed to have been the first casualty of the Cold War.

The John Birch Society is the parent organization for the so called Tea Party and is the group parodied in the film Dr. Strangelove through the character General Jack D. Ripper, the Air Force general who sought to cause a nuclear war to protect his “precious bodily fluids.”  That was a joke. But this family running the U.S. is not a joke but an imminent frightening reality.

Another fact that I uncovered is that Hotze aka Harry Koch committed suicide with a pistol in 1942.  Here is his death certificate.  Harry Koch Death Certificate.   My grandfather was police detective who was tasked with assisting in background checks for the FBI during the war. I’m pretty sure Hotze would have drawn some attention.  Did he kill himself to keep the family sleeper cell safe?

I have found evidence that Hotze aka Harry Koch traveled under false papers in 1921. Hotze used his father’s name also his older son’s name when returning to the US from Europe.  The age of the traveler is 54, Harry’s actual age based on the earliest records.  John Anton was in contrast just 21 at the time. This is how a mole travels.  Underground.

My opinion is that Harry Koch entered the United States under false pretenses as an intelligence agent working for the Dutch, German and/or Russian intelligence services.  At the time these countries were monarchies with interlocking family ownership.  It is possible that he worked for a combination of foreign principals.

Fred C. Koch, Fred’s youngest son and his older brother John Anton Koch both may have worked for their Father’s foreign principal.   I have not been able to determine which side Harry Koch was on during the 1930’s and 1940’s.  Earlier, the work appears to have related to issues important to the Dutch.  During my research, I was able to piece together from source documents, fragments of the Koch Family history including Fred C. Koch’s activities.

The actions of the two sons may soon be exposed in the Mueller probe related to the use of the Koch funding machine that my investigation shows was used to move Russia money to GOP candidates. I believe they may be charged with money laundering, conspiracy to violate US campaign laws and treason for levying war against the US during the 2016 election.

But the evidence now strongly suggests that Mueller has concealed Trump criminal activity and did not even look a the evidence. Moreover, Geoffrey Berman had stated he would recuse from Trump Russia cases but is active in the Natalie Sour Edwards case in the SDNY that involved both Mueller and the Russian funding.

If we survive Trump, the DOJ must dig into the Koch family and their role in the 2016 attack.  If they assisted, I believe all their wealth is forfeited.